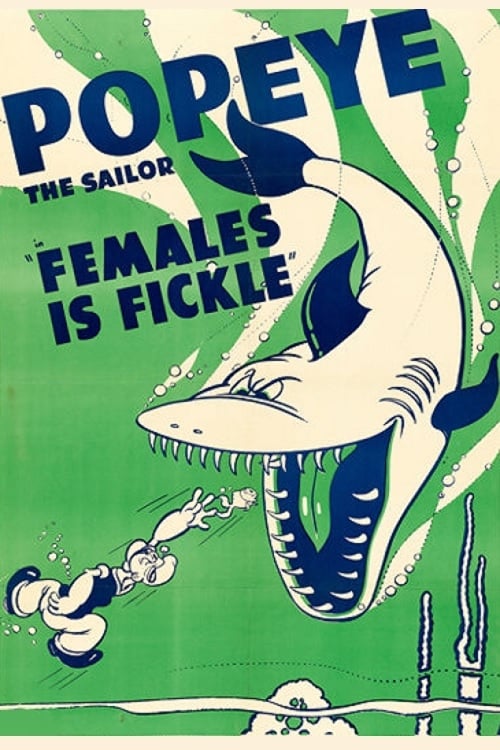 Olive brings her new goldfish onto Popeye's ship, but the fish jumps out of its bowl and into the sea. Olive convinces Popeye to go after it, but the fish wants to play and manages to avoid Popeye until both get trapped inside a jellyfish. After taking a severe pounding from the jellyfish, Popeye eats his spinach, takes on various other marine life, and returns the goldfish to its bowl. But Olive can see the fish is unhappy in the bowl, and sets it free again, which is more than Popeye can stand.

A ship sent to investigate a wave of mysterious sinkings encounters the advanced submarine, the Nautilus, commanded by Captain Nemo.

A civilian oil rig crew is recruited to conduct a search and rescue effort when a nuclear submarine mysteriously sinks. One diver soon finds himself on a spectacular odyssey 25,000 feet below the ocean's surface where he confronts a mysterious force that has the power to change the world or destroy it.

The world's most highly qualified crew of archaeologists and explorers is led by historian Milo Thatch as they board the incredible 1,000-foot submarine Ulysses and head deep into the mysteries of the sea. The underwater expedition takes an unexpected turn when the team's mission must switch from exploring Atlantis to protecting it.

A criminal organization has obtained two nuclear bombs and are asking for a 100 million pound ransom in the form of diamonds in seven days or they will use the weapons. The secret service sends James Bond to the Bahamas to once again save the world.

An oceanic observation station is in desperate trouble after a sudden shark attack wrecked the oxygen supply. The accompanying ship, a coast guard cruiser, and other ships in and around the Bermuda triangle are attacked as well. The US Navy sends a submarine to investigate, but soon they too are under attack.

Four teenage girls go on a diving adventure to explore a submerged Mayan city. Once inside, their rush of excitement turns into a jolt of terror as they discover the sunken ruins are a hunting ground for deadly great white sharks. With their air supply steadily dwindling, the friends must navigate the underwater labyrinth of claustrophobic caves and eerie tunnels in search of a way out of their watery hell.

In the Heart of the Sea

In the winter of 1820, the New England whaling ship Essex is assaulted by something no one could believe—a whale of mammoth size and will, and an almost human sense of vengeance.

The Spy Who Loved Me

Russian and British submarines with nuclear missiles on board both vanish from sight without a trace. England and Russia both blame each other as James Bond tries to solve the riddle of the disappearing ships. But the KGB also has an agent on the case.

There's trouble brewing in Bikini Bottom. Someone has stolen King Neptune's crown, and it looks like Mr. Krab, SpongeBob's boss, is the culprit. Though he's just been passed over for the promotion of his dreams, SpongeBob stands by his boss, and along with his best pal Patrick, sets out on a treacherous mission to Shell City to reclaim the crown and save Mr. Krab's life.

Nemo, an adventurous young clownfish, is unexpectedly taken from his Great Barrier Reef home to a dentist's office aquarium. It's up to his worrisome father Marlin and a friendly but forgetful fish Dory to bring Nemo home -- meeting vegetarian sharks, surfer dude turtles, hypnotic jellyfish, hungry seagulls, and more along the way.

Pirates of the Caribbean: Dead Men Tell No Tales

Thrust into an all-new adventure, a down-on-his-luck Capt. Jack Sparrow feels the winds of ill-fortune blowing even more strongly when deadly ghost sailors led by his old nemesis, the evil Capt. Salazar, escape from the Devil's Triangle. Jack's only hope of survival lies in seeking out the legendary Trident of Poseidon, but to find it, he must forge an uneasy alliance with a brilliant and beautiful astronomer and a headstrong young man in the British navy.

The SpongeBob Movie: Sponge Out of Water

Burger Beard is a pirate who is in search of the final page of a magical book that makes any evil plan he writes in it come true, which happens to be the Krabby Patty secret formula. When the entire city of Bikini Bottom is put in danger, SpongeBob, Patrick, Mr. Krabs, Squidward, Sandy, and Plankton need to go on a quest that takes them to the surface. In order to get back the recipe and save their city, the gang must retrieve the book and transform themselves into superheroes.

Underwater deep-sea miners encounter a Soviet wreck and bring back a dangerous cargo to their base on the ocean floor with horrifying results. The crew of the mining base must fight to survive against a genetic mutation that hunts them down one by one.

The crew of an experimental underwater nuclear base are forced to struggle for their lives when their explorations disturb a creature who threatens to destroy their base.

A deep sea submersible pilot revisits his past fears in the Mariana Trench, and accidentally unleashes the seventy foot ancestor of the Great White Shark believed to be extinct.

For Your Eyes Only

A British spy ship has sunk and on board was a hi-tech encryption device. James Bond is sent to find the device that holds British launching instructions before the enemy Soviets get to it first.

Pirates of the Caribbean: On Stranger Tides

Captain Jack Sparrow crosses paths with a woman from his past, and he's not sure if it's love -- or if she's a ruthless con artist who's using him to find the fabled Fountain of Youth. When she forces him aboard the Queen Anne's Revenge, the ship of the formidable pirate Blackbeard, Jack finds himself on an unexpected adventure in which he doesn't know who to fear more: Blackbeard or the woman from his past.

James Bond returns as the secret agent 007 one more time to battle the evil organization SPECTRE. Bond must defeat Largo, who has stolen two atomic warheads for nuclear blackmail. But Bond has an ally in Largo's girlfriend, the willowy Domino, who falls for Bond and seeks revenge. This is the last time for Sean Connery as Her Majesty's Secret Agent 007. Made outside of the traditional Broccoli production environment due to separate rights having been obtained for this specific Ian Fleming story.

A group of teenage girls summon an ancient man-eating shark after messing with a spirit board that washes up on the beach. An occult specialist must enter the shark's realm to rid this world of the deadly spirit ghost once and for all.

Devoted lifeguard Mitch Buchannon butts heads with a brash new recruit. Together, they uncover a local criminal plot that threatens the future of the Bay.